One of the biggest challenges a home builder faces when designing a show home is keeping their creativity under control.

After all, their goal is to persuade prospective buyers that the home is a perfect fit for their personality and lifestyle.

However, it’s critically important that those creative impulses be reigned in.

If they aren’t — as many builders have painfully discovered — a home might look spectacular but lack practical function.

"This home strikes a perfect balance between refined beauty and a family-friendly design," he says of the 2,242-square-foot, two-storey abode. "It’s a spectacular yet practical home."

If there’s one characteristic that defines the Fairview A, it would be a tremendous sense of space and light.

That bright, open feel starts in the foyer, says Boles.

"It’s a very generous space because the second-floor loft is directly above it. It allowed for a sitting area with a huge window to be placed to its left," he explains. "There’s also a hallway to the right with a flex space that could be used either as an office or bedroom. A four-piece bath is nearby, making for an area that could easily be used as an in-law suite."

"Its brightness comes directly from the openness of the family room," says Boles. "A soaring ceiling allowed for floor-to-ceiling windows on its rear wall that bring in tons of natural light. Glass borders on the stairs open up the whole house, bringing in light from both sides."

The family room’s grand feel, with an entertainment unit with white textured tile backsplash and black shelving that provides an extra splash of style, is complemented by a kitchen/dining area that’s at once stunning yet practical.

"Again, there’s a great feeling of light and space. A huge window behind the dining area lets in lots of natural light, while a patio door on its side wall leads out to a private, recessed covered deck."

Then, there’s the kitchen, which offers a seamless blend of flair and function and a pleasant surprise that tucked away neatly on the wall to the right of the nine-foot island.

"Everyone who’s gone through the home has been attracted to the spice kitchen, which comes with a range, plenty of cabinetry, a sink, window and quartz countertops," Boles says. "It’s perfect for entertaining."

The kitchen proper isn’t bad, either, he adds.

Ascend to the home’s upper level via the smashing glass-bordered staircase, and you find yourself surrounded (again) by light, space, and practical style.

Once more, the glass inserts come into play, defining a loft area to the right of the stairs, and a catwalk that leads to the primary bedroom.

The clear borders also allow light to flow from the windows in the family room and a huge window behind the loft to flow in free, uninterrupted fashion.

And because the primary bedroom was placed at the end of the 15-foot catwalk, it’s well-separated from the secondary bedrooms, which were placed in their own private wing to the left of the loft.

"Parents will love the primary bedroom," says Boles. "Not only is it a generous, relaxing space, but it also comes with a patio door that leads out to a private, covered balcony and a deluxe ensuite with faux wood tile floor, stand-alone soaker tub, tiled walk-in shower with frameless glass surround and a huge walk-in closet with loads of built-in storage."

Boles says the design team at Discovery Homes aced the design of the Fairview A.

"Every inch of the home is usable space, and it looks great yet is practical. It’s the ultimate family home."

Model: the Fairview A 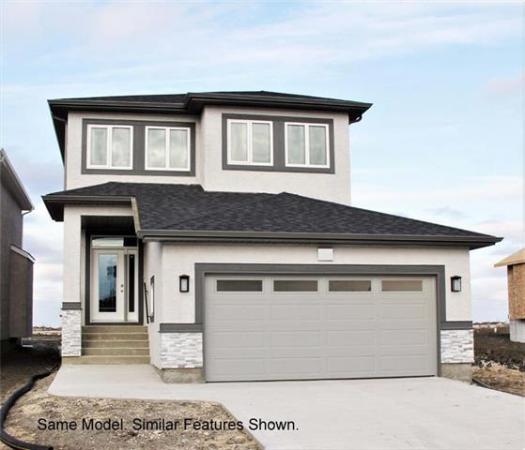