Blame it on the rain

Laura Rawluk gardens in the West Broadway neighbourhood. Her 120-year-old house sits on a standard inner-city lot that is 10 metres wide and 38 metres in length. Ten years ago, Rawluk created a food forest that covered the length and width of her landscape and grew edible plants each year in raised beds made from reclaimed wood. The untreated wooden planters lasted eight years. Rawluk has now switched to a more permanent solution — 11 galvanized steel raised bed planters — but she is also intent on adapting her vegetable garden to the changing climate.

Watering a vegetable garden during a drought is no small challenge. Rawluk has needed to be judicious in the use of her water resources this year. She utilizes four 200-litre rain barrels and two tote containers that in a normal year collect rainfall from downspouts and eavestroughs. Each tote container holds 1,100 litres of water. The first tote was purchased in 2011 for $100 including delivery from Paul’s Containers. "The totes have paid for themselves again and again," says Rawluk. Any amount of rainfall is appreciated right now. Rawluk estimates that even the brief rain that fell in the early hours of Tuesday morning added about 350 litres to each of her tote containers.

Water helps move essential nutrients from the soil into plants. While some vegetables require less water than others, there are other types that need extra water or a soil moisture level that is even and consistent. Blossom-end rot, the bane of tomato gardeners, is caused by insufficient calcium. The conditions that cause blossom-end rot’s characteristic water-soaked spots on the bottom of tomatoes are intricately linked to extreme drought and inconsistent soil moisture. Rawluk plants her tomatoes deep into a mix of soil and compost and incorporates Talk of Tomatoes, an organic fertilizer. She mulches the soil surface with shredded leaves and waters her tomato plants deeply approximately every three days. Rawluk grows several different types of heirloom tomatoes with unique colours and flavours. Black Krim is one of her favourite varieties. This year she is growing Pruden’s Purple, an early heirloom giant beefsteak tomato with meaty purple-pink flesh.

Rawluk uses leaf mulch in all the galvanized steel raised beds to help maintain soil moisture, shade soil, and suppress weeds. Last fall, Rawluk’s neighbours gave her 17 bags of leaves. Each of the beds contain the original soil purchased in 2011 for the wooden planters as well as humus rich compost with high water retention. Rawluk maintains a three-bin compost system. When she replaced her wooden planters two years ago, she also replaced her wooden spruce compost bins. The new bins are built from cedar and have removable planks and side slats to make turning the compost easier. There isn’t space on her small property for all three bins to be in a row, so she stores her "browns" (carbon-rich materials like woody debris including twigs, branches, pine needles, and leaves) in a separate bin that consists of hardware cloth fencing secured to four wooden posts.

Rawluk’s backyard garden faces west and has an open south exposure. The vegetable garden receives six to eight hours of direct sunlight a day which is optimal for growing a wide range of edibles — tomatoes, celery, beans, leeks, peppers, ground cherries, tomatillos, basil, parsley and other herbs, as well as cherries, apples, plums, and apricots. Her healthy food forest is planted with multiple layers of edible plants including tall, vining plants that grow on vertical supports. The raised beds also include vibrantly colourful annuals such as geraniums, verbena, and scaevola to attract pollinators. In the past, Rawluk also grew alyssum and nasturtium, but they attracted too many flea beetles.

The planters are mostly situated east to west and there is ample room to move a wheelbarrow between the rows. The surface of the backyard was once reclaimed brick which has now been replaced with crushed red shale. A French drain was installed last year to move excess water away from the entrance to the back garden which flooded whenever it rained. The capacity of the French drain is over 1,000 litres of rainwater.

Rawluk’s multi-generational household consists of four adults. "We try to grow what we like to eat from spring to fall and eat whatever is in season. We pickle, can, ferment, make jams, and freeze and dry as well as share our harvest," says Rawluk. Rawluk’s monthly household produce budget has increased only somewhat since 2013 when I last talked to her for this column. At that time, she typically spent $150 each month on produce. "I would say that produce makes up about $200 each month of our monthly food budget," says Rawluk.

If the current heat and drought trends continue, Rawluk is considering the use of grey water and drip irrigation systems. "We have discussed employing a cistern like my granny had at her farmhouse," says Rawluk. She is also considering floating row cover tunnels to keep her edibles cool and protected from the sun’s scorching heat. There are many shade options for raised beds as well as in-ground beds. Hoops made from heavy-gauge wires that support shade netting are designed to be easy to install and come in a variety of heights. Floating row cover tunnels also protect plants from damaging winds that can topple and break plants with heavily laden branches. They also help to extend the growing season.

Rawluk wants to try growing vegetables in a cold frame during the winter months and is inspired by the success of one of her colleagues, Beverley Eert, who gardens on a large rural property southwest of Portage la Prairie. Late last fall, Eert started seeds indoors for Tatsoi, Bok choy, and other lettuces and greens and grew the edibles outdoors in plexiglass-topped cold frames throughout the entire winter — even when temperatures plummeted to -40 C. When temperatures were at their most extreme, Eert covered the cold frames with garden quilts.

"Initially I didn’t have a lot of money or resources, but I was really focused on gardening in my front yard," says Rawluk. "When you are on your hands and knees gardening in your front yard, beautifying it for other people to enjoy, you have a lot of conversations with your neighbours and passersby. Gardening in the backyard is different — you have to invite someone in." But to make her backyard more accessible, Rawluk has incorporated vintage grates into her fence for easy viewing as well as a short garden gate with a ledge that invites passersby to lean in for a chat about vegetable gardening and the weather, no doubt. 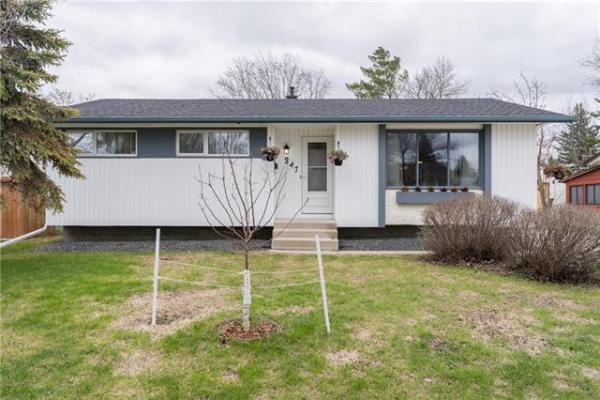