Sometimes called the ‘side-by-side,’ a duplex presents uncommon challenges when a rear deck is requested, whereby two factors are of utmost importance; maximizing the square-footage of the deck without eating up too much of an already narrow yard, as well as providing an adequate yet subtle privacy wall where both sides of the duplex meet. Recently, the deck design was key to ensuring client satisfaction, and required several revisions along the way.

The deck is built using a very traditional approach; two-by-eight joists that rest atop two-by-ten laminated beams on four-by-four posts and adjustable deck jacks, with two-by-six top decking, wooden railings and roughly six-foot privacy walls. And although the initial design called for a single tier, it was decided closer to the build start date that the tiny nook area that allows access to the deck from the back patio doors would be one-step higher than the main deck.

The first task entailed fastening the required ledger boards along the back face of the house. Along the nook area, the width is roughly six-and-a-half feet, while the main deck measures closer to 19-feet total. The higher ‘nook’ tier is framed in such a way as to allow the step plus fascia to fall in line with the stucco of the back of the house and support post on the opposite side of the nook. The nook joists are set perpendicularly from the house atop the beam, held by the house using joist hangers affixed to the ledger with two-inch structural screws. With the nook area framed, the 14-foot joists and 19-foot beams for the main deck surface are then erected into positioned. Four posts and jacks are used below each of two main support beams over the 19-foot span, essentially the width of my client’s half of the duplex.

The structure is confirmed square before the ends of each joist are cut to ensure all joists remain in a perfectly straight line before the framework faceplate is fastened, completing the joisting phase. Stair stringers for the sole four-foot wide staircase at the far end of the deck are custom cut on site from two-by-twelve boards. The stringers are fastened to the main frame, as Day 1 comes to a close.

The next day, the top decking installation begins with the staircase. Working from the outer edge, the two-by-six boards are then systematically installed one by one, staggering all seams of the 16-foot boards to prevent any repetitiveness – random top-decking prevents patterns from becoming an unwanted focal-point. After a lengthy process of top-decking installation, Day 2 is completed without a hitch.

By Day 3, only the finishing tasks remain: the railings, fascia, and privacy walls. Along the side of the deck adjacent to my client’s duplex neighbour, six-foot posts are installed for the intended privacy wall. Two more posts of same length are placed at the nook tier, between the patio-door wall and the support post of the house. Along the back edge of the deck, 36-inch posts are positioned from the neighbour privacy wall to the staircase, as well as from the opposite side of the stairs back towards the nook.

To complete the privacy walls, two-by-eight boards are set horizontally within the posts, to just below the six-foot mark. A two-by-six cap is then affixed along the top edge of the posts. For all railings along the deck’s topside and stairs, top and bottom horizontal two-by-four boards are used as supports for the wooden balusters, affixed at four-inch intervals. Two-by-six caps are also used to cohesively finish the railings. Finally, two-by-eight boards are then fitted between every four-by-four railing and privacy wall post, given the deck’s profile a truly clean and polished look.

When presented with proximity constraints, design is key. In this instance, the client wanted to maximize deck space without over-powering the backyard, while introducing privacy without feeling closed in. By establishing the proper deck depth suited for the backyard, and strategically introducing privacy walls in specific areas, the deck is as welcoming walking out the patio door from the house as it is inviting from ground-level in the backyard. There is no doubt the family will enjoy this outdoor space for many years to come. 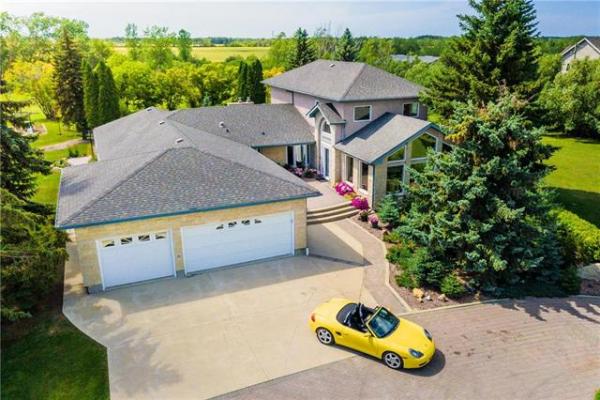