Ahead of its time

If you drove by 816 Cloutier Dr. a little over 10 years ago, you wouldn’t have glimpsed the same home that you see today.

That’s because the 3,000 sq. ft. architectural gem’s exterior was completely revised when an ambitious (and creative) young couple bought the home 10-plus years ago, says Glen MacAngus of Royal LePage Top Producers.

“When they bought the home, the exterior was actually all brick,” he says. “To give it a more contemporary look, they had the entire exterior redone in acrylic stucco. That really brought the home, which was built in 1971, into the twenty-first century.”

That said, the sprawling bungalow — it’s situated on a park-like, three-quarter-acre riverfront lot adjacent to the Trans Canada Trail and Cloutier Forest — features construction and design features that were far ahead of their time, adds MacAngus.

“It was basically built to commercial standards with a custom engineered brick and cinder block shell, poured concrete floors on the main and lower level, engineered commercial roof with three-foot by 10-foot beams running throughout open ceilings and steel beams throughout the lower level,” he notes. “The home is as solid today as it was 51 years ago.”

Once the exterior was redone, it was time to update the home in all key areas, starting with the 46 windows that surround the 88-foot-wide residence.

“All the windows were replaced with tri-pane, maintenance-free windows, including 24 floor-to-ceiling windows. They’re energy efficient, let in lots of natural light and provide great views of the park-like, natural surroundings, and the river behind the home.”

Turns out, the breathtaking views are matched by a well-conceived floor plan — and the high level of detail that went into bringing the king-sized bungalow up to contemporary standards.

A wing to the immediate left of the generous foyer holds two large bedrooms (both currently being used as dens) and a luxurious main bath that comes with a deep jetted soaker tub set in a floor-to-ceiling tile surround.

Meanwhile, a doorway to the right leads to a living room and an elegant formal dining room.

Next comes the kitchen/family room area, which is a special spot for several reasons.

He adds that there’s one more space — a four-season sunroom — that was installed to the rear of the eat-in kitchen and family room adds more livable space to an already amazing area.

“Let’s just say the owners spend a lot of time out here,” he says. “It has a beamed ceiling with two skylights and nine floor-to-ceiling windows that give you a great view of the river and all the mature trees that surround the home. There’s also a patio door that leads out to an elevated composite deck.”

And what a deck it is.

“’It’s 400 sq. ft. in size and is surrounded by 44 feet of clear tempered glass that allows for a perfect view of the river. Two 20-foot by 10-foot electronically powered commercial grade retractable awnings provide shade or shelter from rain at the touch of a button. You can also walk down from it to a beautiful dock area on the river.”

The main floor is then completed by yet another jaw-dropping space: a 400 sq. ft. primary bedroom.

“It not only connects directly to the sunroom, but it also offers a gorgeous five-piece bathroom and two walk-in closets,” MacAngus says. “The view of the trees and river that the window next to the bed provides — sunlight slants perfectly into the bedroom during the early morning hours — is incredible.”

The same adjective could also be used to describe the home’s walk-out lower level, he adds.

“With 2,200 sq. ft. of livable space, it’s massive. It holds a 400 sq. ft. in-law suite, three-piece bath, a gym with an eight-foot-wide patio door that leads out to a riverside walk-out protected by an engineered concrete retaining wall and a games/media area with two windows and commercial fridge/freezer.”

MacAngus says the meticulously updated home’s location is also the thing that dreams are made of.

“It’s a little piece of heaven. You’re inside city limits, yet you feel like you’re out in the country in a world all your own. It’s a cool yet functional house in a spectacular setting that’s ready and waiting for a new owner.” 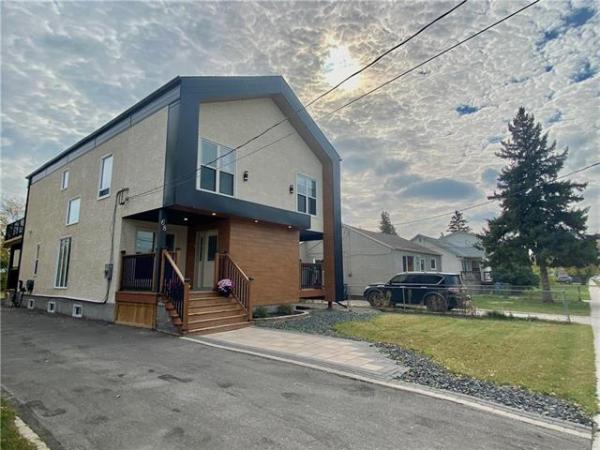